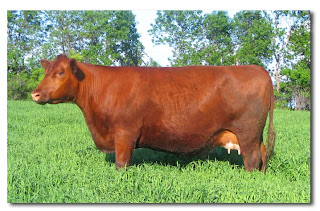 I went to a farm sale this evening with my wife Tania; it was at Bushes Farm, Horton, near Chipping Sodbury. The farmer, John Bishop, had given up milking in 1997 and had started an Angus X suckler herd which today was being dispersed, along with all the machinery and sundries, wherein lies most of the appeal of these otherwise sad events. There were wardrobes and fire extinuishers, old chairs and cycles in the dark silage shed among junk hauled out from musty corners deposited years long ago. Then came the cattle, 21 hombred cows and heifers all with their calves at foot followed by a handsome bull, the head of his small harem. The first two in the ring were knocked down to Mr Hendy, a local cattle dealer from whom I bought calves many years ago. They made £730 and £740 each. Then lot 503 which was a beautiful red shorthorn cow with her shorthorn calf. I had brought the cheque book, but more in hope than expectation. She made £790 and went off to a Mr Guilder who bought another a few lots later. The bull made £1,130 which seemed cheap to me, but I am out of touch with prices these days.
Then , out into the sale field via the barns we all streamed to see the collection of troughs, stakes, tractors and trailers go under the hammer. I had seen a must have sheep race, the appeal of which faded as it rose above £400. Not for one farmer, though tracking the rig up until it reached £800 at which point his rival bid £820. Visibly annoyed the first put down a bid of £1,000 which stopped the proceedings in its tracks, something I have never seen before. He clearly wanted it badly. I let a bale trailer go at £80 and a muck fork for the MF80 loader slip away at £60 and immediately regreted my caution. Then I bought two old troughs for £38 and wondered if I had paid too much. Its the way of things, with these sales, you see. Top bid went on a Massey Fergusson 390 tractor with a Quicke loader which made £8,800. A fair days work for Voyce Pullin the auctioneers who sped through the lots as quick as I have ever seen at a dispersal sale. I am glad we went. This has been a happy farm, I thought as we left the sale field and I felt prividelged to have been there at the end.
Posted by Berkeley Pippin at 15:03